Here’s my method of “thinking on paper”.

I use a blank A4 sheet in landscape format and divide it into 4x4 equal cells (by hand - there’s no need for a ruler). On a wall at my desk I have a set of sticky notes, the central one describes a small number of key processes: “orientation”, “make progress”, “make a list of difficulties”, “generate ideas” and perhaps two more. I start with cell 1 and choose a process, normally “orientation”. I fill the cell with ideas, arranging them in a small mind map or in a small tree hierarchy. My handwriting is small, but after 7-10 lines the cell is full. For cell 2 I can continue with more ideas on orientation, or I can zoom into a promising idea from cell 1. I have around two dozen sticky notes with lists - a list of stimuli that help me generate ideas on orientation, a list on making progress, a list of simple questions, a list of diagram types I can use to see my topic in a new way, a list of crucial things to look for, like points of transitions, or points with some special property.
Unexpectedly, I found a lot of advantages in the limited capacity of one cell - if I do something foolish, I can just restart in the next cell, there are no imbalanced asymmetric maps, there is a sense of making progress and, most importantly for me, I am guided to refocus and to do “metacognition” much more frequently than when I use larger units of mapping or writing. For this metacognition aspect, I find it very helpful to make a list of difficulties. And the sticky notes lists provide enough stimuli for a broad range of situations.
It should be obvious that the method is meant for generating thoughts, not for communicating them.
There are lots of possible modifications to this paper-based “integrated thought development environment” - use a different number of cells, instead of a fixed grid use narrow columns and keep the cell height flexible, or adapt the stimuli lists in all sorts of ways. And there are lots of practices for cross referencing cells and sheets, arranging sheets in a zettelkasten or in a dossier, or keeping track of goals and problems.

I tried to compile a list of stimuli for each of the key processes mentioned, in order to make sure that I would find interesting connections between my current topic and at least one of the stimuli. (I had the hazy idea of “concept chemistry” - I would add concepts to a conceptual broth until some kind of reaction happens - which is perhaps alchemy rather than chemistry.)
Most lists are small tables, where I strike out less useful items and add new ones. It’s a work in progress.
Here are some lists. I suspect others won’t find them useful - compiling your own lists is arguably the better way.
Orientation: What are the results, the deliverables? What are possible visions? (This points to a separate list of stimuli for visions.) What is crucial?
List of problems: What seems not right? What is puzzling? Where are the gaps? What is missing? Are there conflicts? Where could a failure occur?
Diagrams: Timelines. Graphs. Pie charts. Flow charts. Decision trees.
Idea generation: I find it easier to react to a stimulus with a lot of aspects, so I often use stimulus concepts like library, market, internet, organs, … Besides that, I have a condensed list of TRIZ principles and of general “modification verbs”, like rearrange, stretch, rotate, in the spirit of the SCAMPER acronym.
Look at the situation - what things are perhaps not obvious? Again, I’m experimenting with evocative questions, like: Is there a fingerprint? Can you identify points of transition? What are extremal points?
What can be measured?
When working on cell after cell, I do not consult these lists at every step, but just go with the flow of thinking. However, I suspect that it is essential that the lists are directly accessible with a glance - previous experiments with lists in a zettelkasten didn’t work nearly as well.

Thank you, Thomas, this is interesting!

Especially the example picture was inspiring, maybe you can post again one of these to illustrate your points. 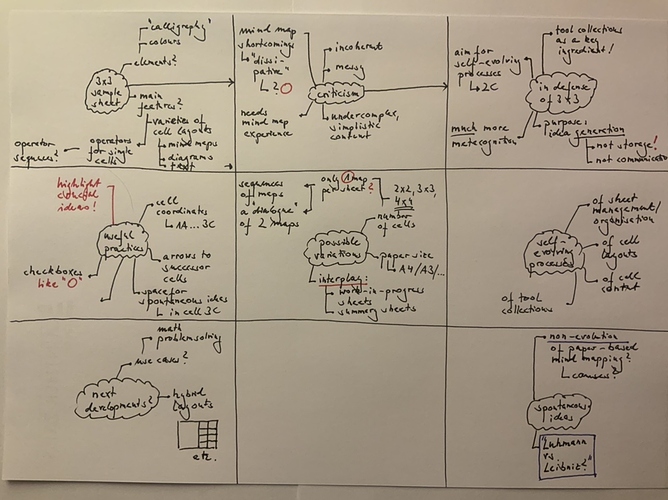 Here’s a first almost-impromptu sample sheet, which I’ve done on the topic of “3x3 sample sheet”. The sheet tries to showcase a number of key features, like the “criticism” topic in cell 1B.

For my own work, I am using a 4x4 layout, a mechanical pencil and tiny tiny handwriting in the proud tradition of the Humboldt brothers and Arno Schmidt;-) For this illustration, a 3x3 layout was more legible.

Edit:
And here is a very similar digital sample with a 4x4 layout: 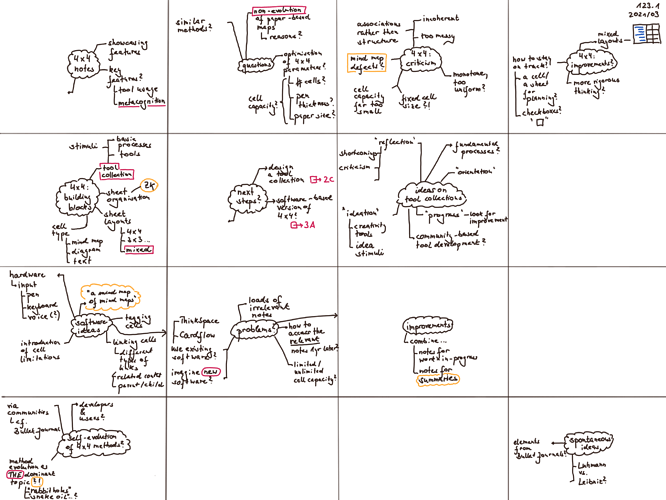 Here’s another short introduction to the method of combining note-making and thinking tools.
Feedback is very welcome! 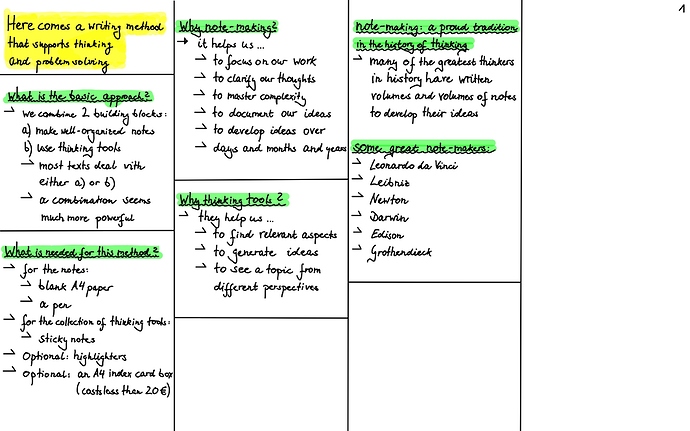 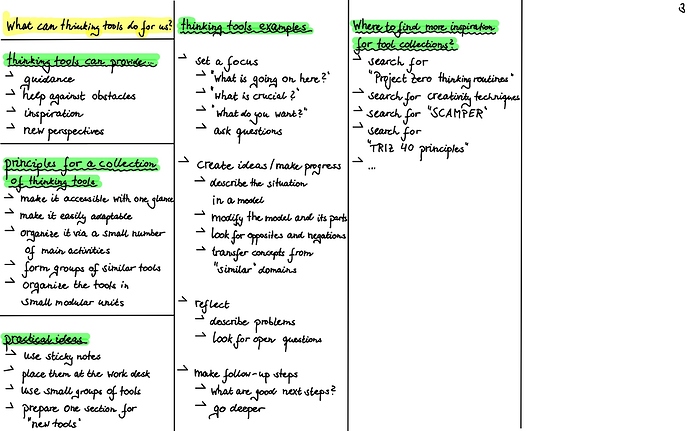 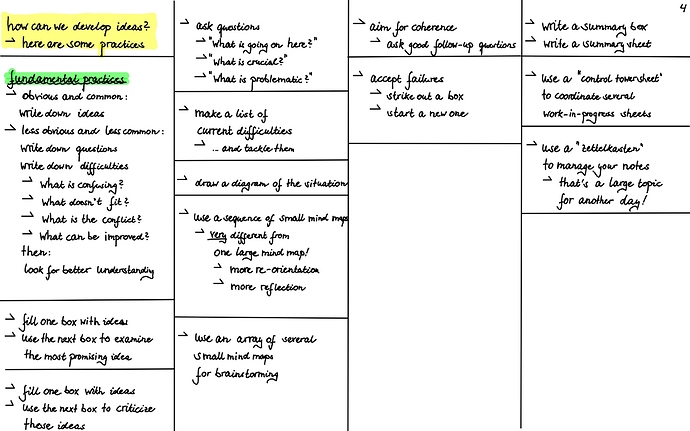 @thomasteepe Thanks for sharing! So is this boxed format how you write your notes? Do you find that to be a key feature? Do you also use a digital note system?