Show and Tell: What is your current personal knowledge management (PKM) setup?

What does your current personal knowledge management setup look like? What are the tools you’re using and why? 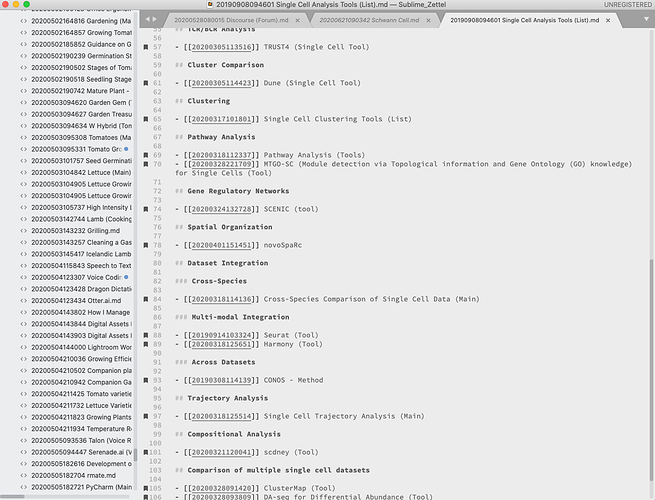 I’ve loosely adopted a Zettelkasten approach. I make small, plain-text notes that link to each other. I diverge from the orthodox approach in that not all my notes are my own words. Many of my notes are lists to other things or direct quotes from primary sources. But the general approach of making small, atomic notes and linking them to each other has been my MO for at least 3 years, and I am very pleased.

I am a physician and neuroscience researcher in an academic setting. Thus, a lot of my knowledge work revolves around extracting information from the scientific and medical literature. Also, I use my PKM to support learning I do for personal and professional goals. For example, as I’ve learned to program in various languages, my PKM (ZK) has helped me to quickly retrieve information from the past that I can use right now for specific ends.

Very cool, I hadn’t heard of Sublime Zettelkasten before! I use Sublime for coding. Hadn’t thought about it for PKM, but if emacs can have org-mode, I guess we can have Zettelkasten mode!

I’m currently using an alpha version of the PKM app I have been developing for the last few years. Basically like WorkFlowy with bidirectional links, smart focus, and automatic linking. New platforms like Roam have a lot more features, but I’ve intentionally hobbled my knowledge work to motivate further development of the app!

Hi @metaraine! Thanks for sharing your setup. That’s great that you’re building your own PKM app. Is this project for personal use only or do you plan to make it public? There is a lot of interest in PKM apps right now.

It will be public. I have a small team working on getting to an initial beta launch. Yes, exciting times!

@metaraine curious what your motivation is for creating an app when there are already so many out there? Also is there a specific angle you are tackling it from the differentiates it?

I use obsidian for my personal knowledge management just because I like its feature set, seems to be actively developed, and I had to choose something. Other than that the only thing I use is emailing myself book highlights through exporting to dropbox (kybooks on iPad). 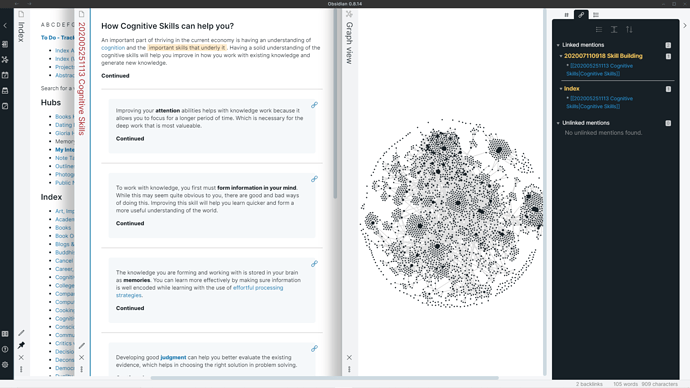 When I began development, Roam, Logseq, and others didn’t exist yet, so there is plenty of overlap. However I have a hard requirement of mobile-first, since I want to be able to capture ideas no matter where I am. I designed the focus system (automatic collapse and expansion) and a custom gesture system for this reason. I would say the mobile experience and the design principle of minimal mediation in order to induce prosthetic sensemaking is what differentiates it from other second brain apps.

I use obsidian for my personal knowledge management just because I like its feature set, seems to be actively developed, and I had to choose something.

Yeah, Obsidian is one of the good ones.

I haven’t even heard of Logseq before, so many! That is cool that you’ve had one in development for a long time.

“minimal mediation” is just saying you don’t want there being any barriers to entry for creating a note?

“prosthetic sensemaking”, not sure what you mean by that?

I have a note sequence somewhere on designing the perfect note taking app because I find that question interesting. If I were to try to get at the heart of the process and think about what is really important, what would that be?

For example my current obsession is viewing note-taking & zettelkasten through the copy, transform, combine framework.

@lizardmenfromspace Did you come up with the copy, transform, combine idea? That’s a succinct template for describing what we’re trying to do.

I haven’t even heard of Logseq before, so many! That is cool that you’ve had one in development for a long time.

I know, it’s so hard to keep up! I’ve only just started peeking out to see what others are up to :).

“minimal mediation” is just saying you don’t want there being any barriers to entry for creating a note?

Here I’m referring to a specific feature of extended cognition, as described by Andy Clark. Basically, when the feedback loop is tight enough, a tool feels (literally is) an extension of your body. Think using a fork, using a hammer, or typing on a keyboard. You don’t move your hand in order to move the hammer to hit the nail; once you get a feel for it, you simply move the hammer to hit the nail because the hammer is incorporated into your psychomotor framework.

Although Andy Clark mostly sources from various Cognitive Science experiments, I find Merleau-Ponty and Michael Polanyi to provide a much richer account of this phenomenon metaphysically and phenomenologically.

“prosthetic sensemaking”, not sure what you mean by that?

Prosthesis is the general phenomenon of extended cognition I describe above. Prosthetic sensemaking is the name I give to performing sensemaking through a similar extension of the body: the sensemaking or writing tool becomes an extension of the thinking process. I think many of today’s second brain designers are implicitly operating on this principle, although they can go astray into reifying knowledge as an object as opposed to an artifact of what is primarily an ongoing, dynamic sensemaking process.

Great instance of a more process-oriented view of knowledge. It still involves conceptual artifacts, but they have been backgrounded in favor of diachronic, phenomenological processes of sensemaking.

@Alex it is not my idea, it comes from Everything is a Remix, which is my brief notes on this video series.

Although Andy Clark mostly sources from various Cognitive Science experiments, I find Merleau-Ponty and Michael Polanyi to provide a much richer account of this phenomenon metaphysically and phenomenologically.

Clark and Merleau-Ponty mentioned in the same sentence - I may have found a new oasis.

I’ve had Merleau-Ponty’s book Phenomenology of Perception on my shelf for some time now, but haven’t gotten very far into it.

As far as PKM, my printer is the first step for articles that are worthy. I underline and make margin notes on paper. I rethink those annotations and create a note in Obsidian, where I try to link the note to others with adjacent concepts. No note should exist in isolation, but each should be atomic (I.e. self contained thoughts).
I also use DEVONthink for its AI, and have it index the notes that are in Obsidian. Sometimes the See Also function reveals something I hadn’t thought of.
Finally, PDFs are stored in Bookends, and the paper copies are stored in sleeves in binders, with a location field in Bookends that tells me the binder number, and the location within that binder. A somewhat modified version of this write up that I did a while back.

What do your notes look like in Obsidian? How granular do you make them?

Thanks for your question, Alex. It has proven to be thought provoking, and has prompted me to put some thought into the atomicity of my notes, in addition to their granularity.

I suppose my notes fall into roughly three sizes, small, medium, large. Large would be notes from reading articles, where the note contains the majority of the notes I made about that article. I make links to other notes of various sizes, based on the concepts.

Medium notes would be things like brain regions. For instance, dorsolateral prefrontal cortex (DLPFC), which would have notes about its functions, links to small notes, as well as backlinks to articles that describe some research on that area (for instance).

Small would be more of a Luhmann-style atomic note (as I understand it), and would represent a concept or factoid of some type.

In thinking about the atomicity of my notes, I said above that “each should be atomic.” In thinking about it though, I realized this is technically impossible. For instance, the aforementioned DLPFC - in order for it to be truly atomic, it would have to encompass all of neuroscience - anatomy, physiology, function, etc. So the concept of being “atomic” depends on the context of the person writing the note. For example, I could look at one of Luhmann’s atomic notes and have no idea what he was talking about, because it does not include the background knowledge he had when writing the note.

And this brings up another interesting nuance, the context of notes is going to vary over time as our knowledge of the field develops and grows with time. Today’s atomic note might be somewhat incomprehensible to our past self. Similarly, today’s atomic note could be rather simplistic and intuitive to our future selves, and future self might wonder why we even bothered to make note of the thing.

I’m still thinking these things through, and don’t know that it’s fully resolved.